There’s something rote about Woody Allen films. In his sixth decade of filmmaking, both writing and directing, he has crafted and refined his own genre: neurosis plus jazz, adultery and A-listers; sometimes there’s murder, often there’s humor, but it is always with a deep sense of mortality. “I don’t want to achieve immortality through my work;” to quote him, “I want to achieve immortality through not dying.”

In early Allen films his work was a kind of morality play, often farcical, no doubt cynical, but there was a palatable guilt, a sense of wrongdoing, that permeated his tales. While he never anchored this guilt in the existence of God, one was always left with a sense of disappointment that there was evil in the world without justice.

Consider Crimes & Misdemeanors (1989) the most direct statement of his philosophy. Judah, an opthamologist forced by his mistress to choose between leaving his wife or being revealed as an adulterer, considers murder to resolve his problem, but worries that, as his father warned him, “the eyes of God are on us always.” Judah’s primary moral counsel comes from a Rabbi who is slowly going blind. The ordeal ends in murder and pity, but it is clear that there is no divine justice. Murder may out, but over the course of Woody Allen’s career the eyes of God have slowly gone blind.

Blue Jasmine begins in the air. Jasmine (Cate Blanchett) is midway through her fall from grace, as defined by the apex of the New York jet-setting lifestyle, to settle in San Francisco with her sister and her bluecollar boyfriends and ex-husband. Reduced to bankruptcy and shamed by not only her husband’s financial fraud (and subsequent arrest and suicide), but also by his serial adultery, she snaps and lapses into a nostalgia so intense that she breaks out in conversation whether or not anyone is listening or even present.

But at the nadir of her shame, at the point of failing a computer class and suffering the advances of a neebish dentist in her loathsome job as a secretary, her life is charmed once again by meeting a suave, political aspirant, whose lofty life goals match her standards of accomplishment. She must lie and save face and hide her current indignities, but her pendulum is back on the upswing.

The movie begins with Blue Moon, the popular classic here covered by Woody Allen’s jazz band pianist Conal Fowkes. It is a song about finding love. The blue is a reference to the expression “once in a blue moon” but also, when laid over Jasmine’s narrative, the melancholy state and the bruised ego that she endures. Throughout the film Jasmine relates that she heard this song when she met her husband Hal. The lyrics of the song begin in loneliness and end with: “Now I’m no longer alone/ without a dream in my heart/ without a love of my own” which is a mirror opposite of what happens in the film.

A further texture of the film is Tennessee Williams’ classic play A Streetcar Named Desire. Blanche is played by Blanchett, New Orleans is played by San Francisco, Alec Baldwin shifts from his role as Stanley Kowalski in the 1995 film version to play the disgraced husband (the sin shifting from latent homosexuality to being a Bernie Madoff clone), and film critics get a nice paragraph or two out of it. But these concerns are tertiary to the genius of Woody Allen. In the hands of a lesser talent, Blue Jasmine would be maudlin with a chance of lachrymose. 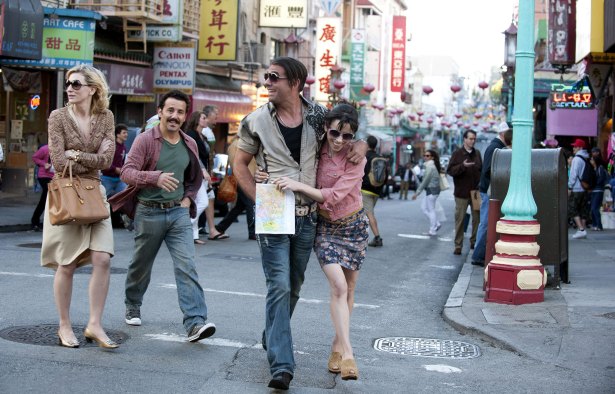 While most want to impute noble sentiments to tragedy, Allen is rigorous in his denial of attributing grandeur to suffering. The viewers are called to feel pity for Jasmine, though she is the architect of much of her suffering. Clearly she loves Hal, despite her self conscious naivety toward his wealth, and in his loss she is lost. The audience is also called to pity in seeing Jasmine’s estranged stepson who wants nothing to do with her (and vicariously for Allen and his estranged stepdaughter, though I would be remiss to point out that his biography is at best seedy, at worst perverted). There is pity for Jasmine’s sister Ginger, the peerless Sally Hawkins, whose luck is opposite to that of Jasmine’s, falling ever more lowly into tragedy despite her buoyant attitude. But this suffering is inevitable and unavoidable and happiness is fleeting.

Guilt apart from sin is merely a dysfunctional pity. Woody Allen, without a Vergil to guide him, heaps pity on the broken humanity that populate his films (and vicariously himself), but pity without piety is empty. This is what separates him from the other peddlers of drama who see innate value in suffering, who see happiness as the reward for persevering; Woody Allen refuses to accept the fruit from the tree he has rejected.

As Woody Allen put it himself in a recent interview: “It’s just an accident that we happen to be on earth, enjoying our silly little moments, distracting ourselves as often as possible so we don’t have to really face up to the fact that, you know, we’re just temporary people with a very short time in a universe that will eventually be completely gone… The best you can do to get through life is distraction.”

Distract us he does, from the wounded glamour of Blanchett to the coarse schlub of Louis C.K., the film keeps us leaping from one character trainwreck to the next. But it’s bleak tonic that Allen offers. Watching a film by Woody Allen brings us to the brink of troubled waters and shrugs. Even as Jasmine receives her final comeuppance and Ginger regains her pyrrhic happiness we can only cry out “O Lord how long?” while we are buried by crimes and misdemeanors.